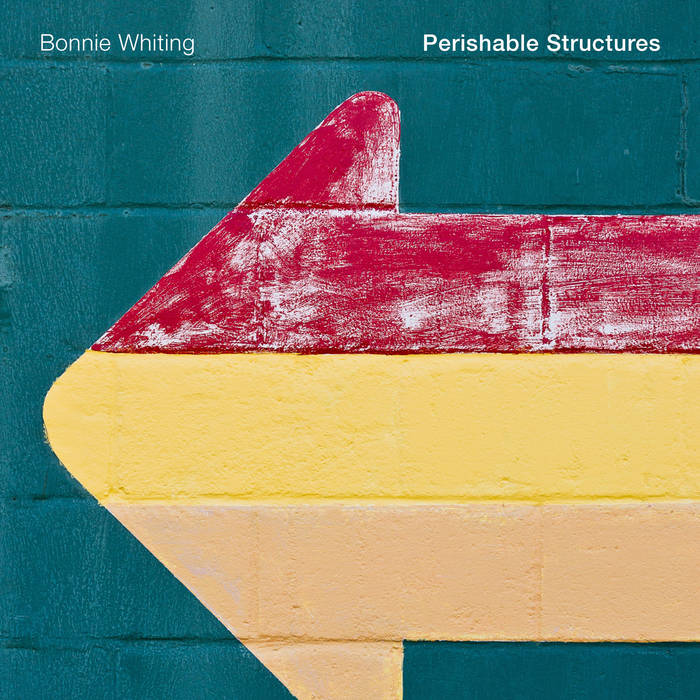 On Perishable Structures, Bonnie Whiting presents works that display the natural connection between storytelling, theater, and experimentalism within the percussion repertoire. John Cage’s legacy is felt strongly throughout this program, as a pioneer in percussion music both with and without text as well as a defining voice in experimental aesthetics. Whiting’s program explores a range of shifting parameters, on a continuum from vocalizations that function as non-semantic sounds to text driven narrative, and percussion sounds that merge with the voice to gestures that provide a contrasting musical dimension.

The album begins with a movement dedicated to Edgard Varèse from Whiting’s composition, ...perishable structures that would be social events. Alongside Cage, Varèse’s impact on percussion’s role in 20th century music is incalculable, and Whiting’s work takes his snare drum writing in the iconic ensemble works Ionisation, Intègrales, and Amèriques as a point of inspiration. In Whiting's piece, Varèse’s words are alternately audible and buried underneath the snare, creating a seamless stream of texted and non-texted "syllables," a manifestation of what Varèse called “intelligent sounds.”

Frederic Rzewski’s classic To the Earth for four clay flower pots sets a 500 BCE Homeric Hymn in a ritualistic paean to the goodness and justness of nature. The simplicity of the musical setting for flower pots reveals a meditative and independent but supportive relationship between speech and percussion.

If Whiting’s Varèse setting uses the drum to occasionally obscure the text, and Rzewski creates an accompanimental texture with the flower pots, Vinko Globokar’s Toucher endeavors to merge the spoken and percussive sounds into an imitative, hybrid texture. In effect, Globokar “transcribes” the spoken text onto percussion instruments, often heard together in unison, as they match the inflection, gesture, and contour of the words. Setting a French translation of Bertolt Brecht’s Life of Galileo, Toucher demands several levels of virtuosity from the performer: theatrical (thirteen different characters are embodied in the recitation and the narrative is presented out of the story’s chronological order), interpretive (non-traditional notation connects speech patterns to the percussion instruments), and instrumental (in addition to the synchronous passage with voice, there are several hyper-notated percussion alone interludes).

The only work on the recording that does not involve a speaking part, Richard Logan-Greene’s Your Thoughts While Listening nevertheless engages with translation, in this case, from a non-notated electronic music piece to live percussion instruments. The result is a rich tapestry of timbre, from ringing triangle to rumbling bass drums to scraping sounds on drum heads.

“Speaking Percussionist and Ditties,” the fourth movement from Susan Parenti’s wry Exercise for Hands Right, Left and Deserted Mouth closes the program. Parenti initially establishes a one-sided telephone conversation; we hear the percussionist’s voice and the "response" from the other end of the line is heard only as percussion sounds. As the work evolves, Parenti introduces satirical fragments of popular and patriotic songs, bombastic outbursts, absurdist utterances, and off-kilter percussion gestures. A kind of counterpoint of ideas and characters emerges, devolving into misheard turns of phrase that can be understood several ways, and exploring the subtext and subtleties of verbal communication.

Throughout Perishable Structures, Bonnie Whiting brings precision, intensity, and flair to both the percussion and spoken components of these scores. This collection of works underscores a fascinating wealth of relationships between semantic and abstract sound that is applicable to any works merging instruments and text, but particularly at home in the percussion repertoire given its grounding in the tradition of storytelling.

Cover Photo by William on Unsplash

Recorded in 2015 at the Green Center for the Performing Arts at DePauw University in Greencastle, Indiana