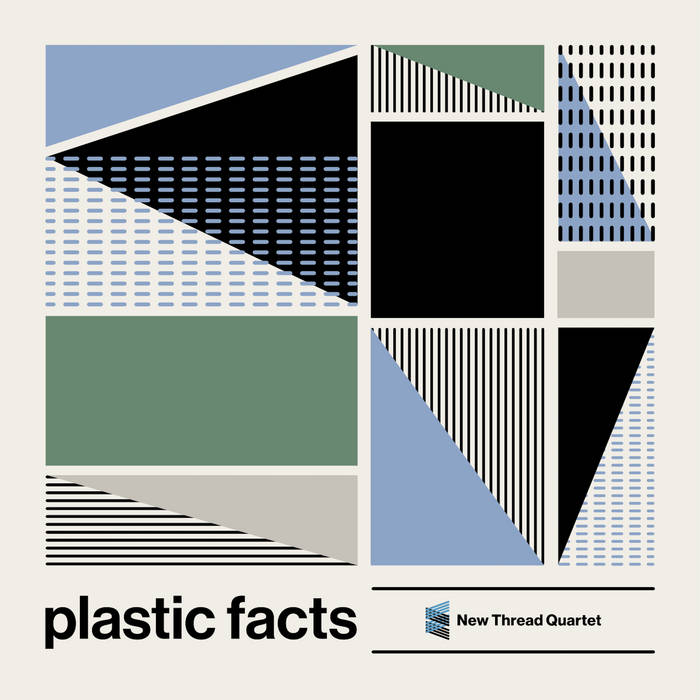 New Thread Quartet is an “adventurous, rule-breaking” (NewMusicBox) saxophone quartet who focuses on working closely with composers, from students to established professionals, to bring life to today’s compositional voices. “Plastic Facts” is the group’s debut album, highlighting their extended collaborations with composers in music that explores the intricacies of extended techniques on the saxophone and the unique sound worlds available to this ensemble, underpinned by the quartet’s virtuosic ensemble playing.

Michael Djupstrom’s Test was written in 2001 and is the only piece not written for the quartet on the album, though the quartet is credited with giving this piece its revival. Test opens with a solo melodic line that creates the basis for the development of the piece. This melody came to the composer after seeing the “slow, rocking flight” of a bird in Michigan, which we can also hear in the constant trills throughout the piece. After presenting the opening melody, the rest of the ensemble begins to interrupt with trills and sforzando interjections, leading to moments of tight melodic runs alongside fragments on the opening theme. The middle section is one of stasis, consisting of a melody supported by a steady drone in the bass, while the other two saxophones add harmonic color and countermelodies. The piece ends with the ensemble increasingly playing together, constantly interrupted by trills and descending runs, and with a return to the plaintive opening melody.

Marcelo Lazcano takes a Buddhist phrase, “We are what we think. Everything we are arose from our thoughts,” as the basis for Ser. Fragments of the phrase are whispered by members of the ensemble, punctuated by breath sounds and slap tongues from the saxophones. Stopping and starting, occasionally interjecting, and moving fluidly and without fanfare from idea to idea, the piece mimics our own journeys and wanderings inside our heads.

Plastic Facts (Les Sons Multiples) is inspired by an architectural idea of what the architect Le Corbusier, whose studio Xenakis incidentally worked in for many years, called “plastic facts,” or basic architectural necessities, such as doors, windows and walls. He saw these as constraints to work with, and as a challenge to see both how they could be worked with and how they could be made new. The “plastic fact” of this piece is multiphonics, appearing in almost every moment of the work. At various times, Anthony Gatto uses multiphonics for their harmonic content, their ability to be disruptive, to create screaming ensemble chords, or as an unsteady support to a melodic line. Being presented in such varied contexts, the “fact” of multiphonics never appears the same way twice, continually inventing new facts of how multiphonics can be used toward expressive ends.

Dedicated to George Lewis, Richard Carrick’s Harmonixity is based on two acoustical phenomena: the natural harmonic overtone of each saxophone, and how a single line can reverberate to create an impression of multiple voices. The piece begins with sustained notes, exploring the overtones and coloration available to each saxophone. Carrick then presents a melodic rendering of this reverberation through a fast, gently pulsating motif that evolves into a texture of its own. These two textures feed each other throughout the piece, in constant response to each other while keeping their distinct identities.

New Thread Quartet shines throughout with their virtuosic ensemble playing and deft ability to make extended techniques purely expressive in this album, reaping the dividends paid through their close collaboration with each composer.