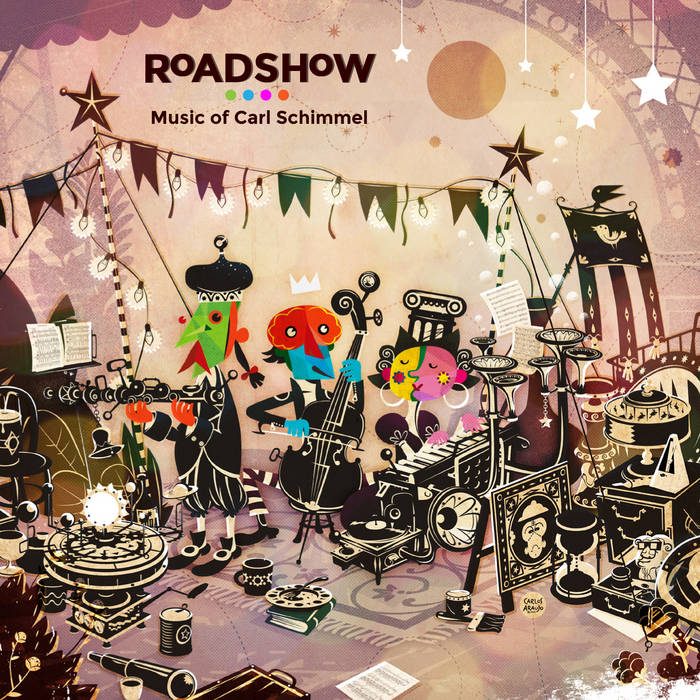 Carl Schimmel’s music possesses a mathematical structural sensibility augmented with a playful sense of humor. His wonderful ability to communicate semantic meaning from moment to moment gives his scores a engaging narrative, and his penchant for miniatures fits perfectly with his colorful depiction of different characters. He is influenced deeply by literature and extra- musical phenomenon.
Both of Schimmel’s “Roadshow” pieces are written for his children, one for his son Otto and the other for his daughter Thora. Schimmel was inspired by the hit PBS show “Antiques Roadshow,” and each miniature movement is a musical imagining of how his children might play with toys he saw featured on the show. The first track of the recording, “Silver Atom Ray Gun” from Roadshow for Otto, with its bravura opening and maudlin asides, encapsulates Schimmel’s occasionally cartoonish presentation. The opening movement Four Nocturnes from “The Oblivion Ha-Ha” sets poetry by James Tate, an American poet whose surrealist imagery veered toward the absurd later in his career. Schimmel’s style of setting the text here verges closer to recitative than lieder, and an attentive listener might hear references to Debussy in the final movement. The six movements of his String Quartet #2 are inspired by cubist paintings that Schimmel then incorporates as characters in the piece (the paintings are by Braque, Picasso, Gleizes, Gris, Metzinger, and Leger). Like a cubist painting, the piece’s six portrait movements form six sides of the same complex entity, perhaps even facets of a single personality. The final work on the recording, The Pismirist’s Congeries, returns to something of the light character of the “Roadshow” pair. A “pismirist” is someone who collects small, insignificant things, and each movement of this work is named after a different keepsake, such as “orrery” (a clockwork model of the solar system”) or “zufalo” (a small flute used to train songbirds). This collection, Schimmel’s debut full length release, shows the composer at his best, writing intricate, expressive music that balances wit and pathos.

Carl Schimmel is a composer based in Iowa and Illinois. Praised by The New York Times as “vivid and dramatic,” his recent music is dense with literary and musical references, often humorous, and combines intensity of expression with a structural rigor which draws upon his mathematics background. In infusing his music with extra-musical influences such as poetry, art, and even unusual words, he strives to construct nexuses of experience which reflect both the inner life of emotions and the outer physical world which shapes us and is shaped by us. Winner of Columbia University’s Joseph Bearns Prize and the Lee Ettelson Award, Schimmel has received honors and awards from many organizations, including the MacDowell Colony, Yaddo, Copland House, New Music USA, and ASCAP. His works have been performed in Carnegie Hall’s Weill Hall, Merkin Hall in New York, Severance Hall in Cleveland, the National Arts Centre in Ottawa, St. Martin-in-the-Fields in London, Orchestra Hall in Minneapolis, and at other venues throughout North America, Europe, Australia, and Asia. He has received performances and commissions from the American Composers Orchestra, the Minnesota Orchestra, the Buffalo Philharmonic Orchestra, California EAR Unit, the Left Coast Chamber Ensemble, Alarm Will Sound, North/South Consonance, Quintet Attacca, the Mexico City Woodwind Quintet, and many others. A graduate of Duke University (Ph.D.), the Yale School of Music (M.M.), and Case Western Reserve University (B.A. Mathematics and Music), he is currently Associate Professor of Music Theory and Composition at Illinois State University in Normal, IL.