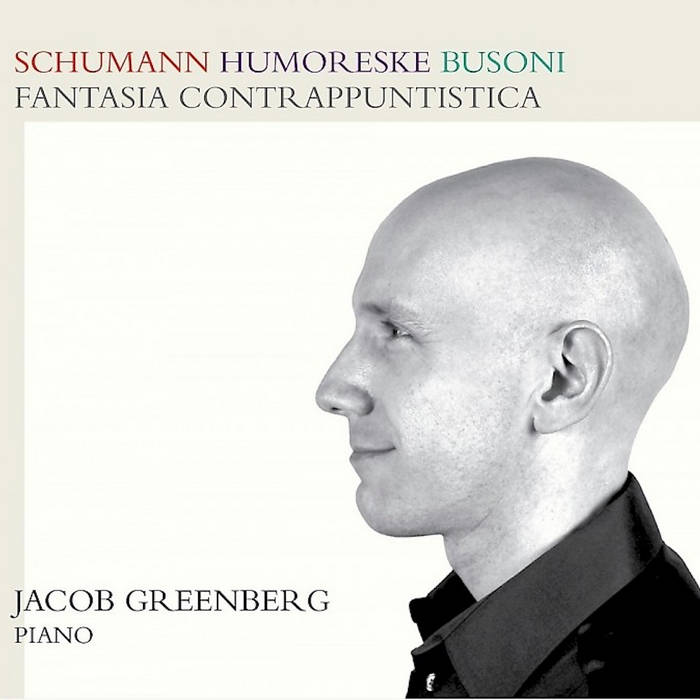 The two masterpieces on this disc are musical fantasies of equal ingenuity but contrasting effect. Schumann's Humoreske, like many of his other early piano works, can be as private as a diary entry; Busoni's virtuoso Contrapuntal Fantasy, however, is meant for a grand stage. But both pieces are not so simply characterized as public or private, as each reflects the personalities of the composers in reaction to the spirit of their age.

Robert Schumann made a futile mission to too-conservative Vienna in 1838, trying to secure a wider audience for his compositions. He wrote straightforward pieces for those concertgoers - his Arabeske and Blumenstück - but simultaneously worked on the long Humoreske, for which he could not have imagined a likely performance. The piece therefore became everything Schumann could not create in his more "public" opuses - it is alternately flighty and pensive, and a thousand moods in between.

The Humoreske can be described as a solitary walk through the woods, during which Schumann gets closer to the core of his true self and returns refreshed. That the music remains so sure-footed among its unpredictable adventures shows the mastery of its construction, which derives from one basic rhythm, a march figure that permeates the piece's main themes throughout its five episodes, routing it among many digressions, but is rarely explicit.

In the Humoreske, Schumann dons many guises - poet, warrior-hero, and languid Romantic - staying wide-eyed on his journey through identities. The private dimension of the piece is most striking at the beginning of the second section ("Hastig," or hasty), where Schumann writes out, in a staff of its own, an inner musical line not to be played but articulated only in reflection through the surrounding music. Labeled "Innere Stimme" (inner voice), the profoundly intimate melody begs the questions: who is this music even for, if its essence can only be thought by the performer alone? The wildly introverted passage is however at the same time ambitiously public, as it is an attempt to define the spirit of the Romantic era - an epic gesture, although one that is rooted in the secret expressions of an unheard language.

In his public life, Ferruccio Busoni assumed multiple roles: showman, classicist, and mystic. Known as the greatest pianist of his age and perhaps of all time, it was rather his role as a composer that obsessed him. Devoted to music's history - and specifically to J.S. Bach - Busoni was equally committed to a vision of music's future, best summarized in his inspirational Outline for a New Aesthetic of Music, first published in 1907. In it, Busoni accurately predicts nearly every major development in music through the twentieth century and beyond.

"Music was born free and to win freedom its destiny," Busoni proclaimed in the essay; but with that freedom, he realized, comes the need for rigor. Busoni developed a mature compositional style that was indebted to Bach's counterpoint, and which forms the basis of the Fantasy. But Busoni's harmony is unexpected, and alluringly ambiguous. Because he looked simultaneously to past and future, Busoni's "sound" always seems perched on a stylistic divide.

Busoni considered the Fantasy his most significant solo piano piece, and he rethought aspects of the work in the 1920s for an equally important two-piano version. It is "about" Bach's unfinished masterwork The Art of Fugue. As a prelude, Busoni writes a loose set of chorale variations on a Lutheran hymn, a trembling evocation of the idea of Bach - and then Bach himself arrives, as the last, multi-subject fugue from The Art is presented in Busoni's unique transcription, with pungent modern harmonies added. Bach's work trails off as the third fugue subject incorporates the letters of the composer's own name (in the German musical spelling, B-A-C-H starts with B-flat and ends with B-natural), and then Busoni completes Bach's third fugue as well as the projected fourth. From the start, Busoni conceived the Fantasy as a monumental form, and portrayed it in a drawing as a building - an edifice to Bach's legacy - with columns representing all sections of the work. The Fantasy is clearly a showpiece, but its Gothic and Baroque sacred architecture also houses Busoni's more contemplative, mystical communion with Bach.

What is a public epic of music, and what is a private one?

-Jacob Greenberg, from The Liner Notes