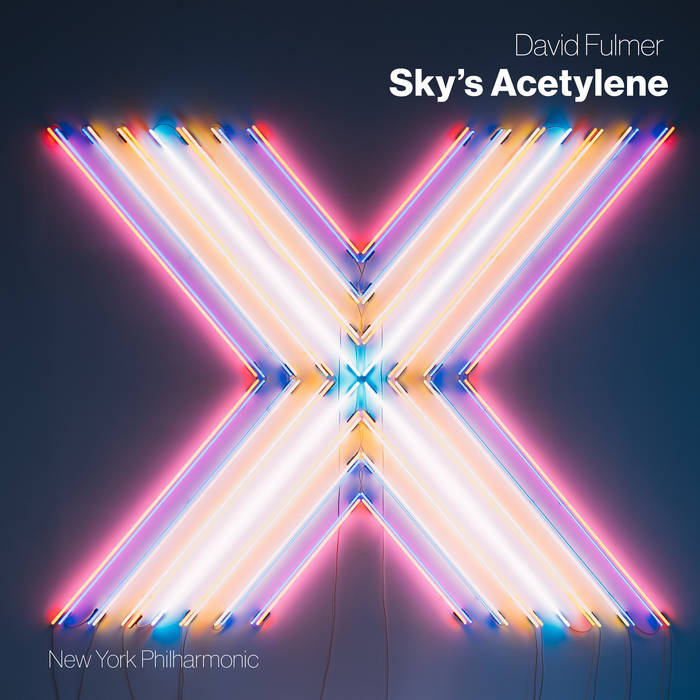 Composer, conductor, and violinist David Fulmer has received critical acclaim for his works, performances, and dedicated commitment to contemporary music. Sky's Acetylene was commissioned and premiered by The New York Philharmonic as part of their CONTACT! series. This EP release celebrates this kaleidoscopic work that features each of the five instruments alternately in soloistic passages before bringing them back into the tightly knit rhythmic interplay of the hybrid ensemble.

David Fulmer’s Sky’s Acetylene was written for and commissioned by the New York Philharmonic on the occasion of their 175th birthday for their adventurous CONTACT! series, hosted at National Sawdust in Brooklyn. Fulmer is a critically acclaimed composer, conductor, and violinist who has been a Guggenheim Fellowship recipient and an Academy of Arts and Letters Academy Award awardee.

Sky’s Acetylene is a kaleidoscopic work for flute, harp, percussion, piano, and double bass that balances taut anticipation with occasional moments of expressive violence. The work features the individual instruments in solo passages in turn before reintegrating them into a malleable, viscous ensemble texture. Ornamental figurations and mysterious harmonies are punctuated by sudden outbursts of urgent material. Flutist Mindy Kaufman is featured prominently on bass flute, flute, and piccolo, frequently leading the work through a quasi protagonist’s voice, with pianist Eric Huebner providing constant harmonic re-contextualization. Nancy Allen’s harp adds splashes of vibrant color, Dan Druckman’s percussion part punctuates gestures in the other instruments, creating hybrid timbres. Fulmer has deftly created a unique musical eco-system in Sky’s Acetylene, one in which the inexorable structural direction of the work is sometimes shrouded behind the sensual moment-to-moment texture. The trajectory of the piece is subtly reflected in the evolution of the flute register — starting with low utterances and slithering lines on the bass flute, the part ascends through athletic passagework on the C flute before closing with ethereal piccolo textures that fade into atmospheric harmonics in the harp and piano.