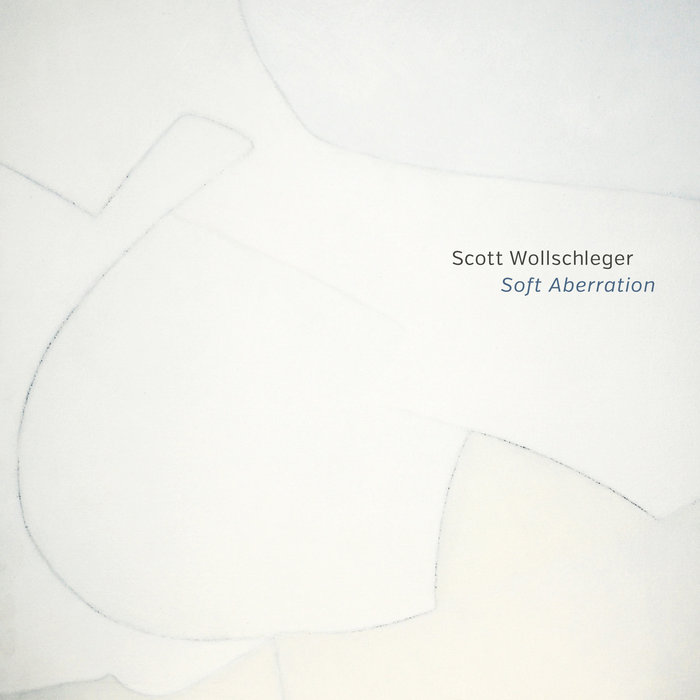 Described as “evocative” and “kaleidoscopic” (The New York Times), composer Scott Wollschleger’s music is at times deconstructive, disembodied, and dystopic, anchored by his penchant for arresting instrumental colors. Wollschleger probes timbre, instrumental relationships, and aesthetic implications to find transcendent moments in unique textures. Brontal Symmetry, the opening work written for the Longleash piano trio, is a sort of a puzzle. The work is comprised of a series of “discarded scraps” from other pieces, and Wollschleger introduces them, jumpcuts to other material, and comes back, playing a kind of memory game with the listener. The music itself careens between cartoonish, macabre, and mechanical — one could almost imagine it as the soundtrack to an avant-garde film noire. Soft Aberration, written for pianist Karl Larson and violist Anne Lanzilotti (who also produced the recording), is Feldmanesque in its temporal suspension, with exploratory phrases that are repeated with variation and framed with poignant silences. Wollschleger writes that the piano and viola parts project a “broken echo” of each other, striving to see in the other some mirror of their own material. The viola part employs white noise frequently, as if reaching for the shadow of full voiced music from a time before the piece began. He observes that this “broken echo” relationship imitates life, in which we are always trying to understand and communicate seamlessly with people with whom we are close, but “always missing each other a little bit.”

The solo cello work, America, written for John Popham, returns to the glitchy, machine-like repetition of Brontal Symmetry, mixing a panoply of extended techniques together in a schizophrenic meditation. White Wall, written for the Mivos Quartet, focuses on white noise techniques on bowed string instruments, similar to what was heard momentarily in Soft Aberration, as a foundation from which fragile harmonics and fleeting melodic fragments emerge. White noise is the starting point for the work, but for Wollschleger it also represents an aesthetic ending point, as a manifestation of “complete emptiness” or “the bleached out remains of something.” As Part 1 evolves, we hear more continuity to the fragile pitched lines and eventually they grow into a otherworldly dance, always refracted through a distorting prism. This too disintegrates as Part 2 draws to a close, ultimately returning to white noise, the ground for the entire work. Bring Something Incomprehensible into This World, written in 2015 for soprano Corrine Byrne and trumpeter Andy Kozar, is heard here in three parts, though it was originally in one continuous whole. Wollschleger explores the dynamics of duo writing and their invariable manifestation as some form of dialogue. In Part 1, the text is broken into fragments of single words and syllables, with the trumpet writing matching this deconstruction with disjointed cells of intervallic leaps, air sounds, wah-wah mute calls, and short scalar bursts. The occasional synchronicity of voice and trumpet timbres, what Wollscheger terms a “dirty unison,” creates a quasi “mutant offspring” hybrid instrument between the two. Part 2 explores more sustained pitches in the voice, with the trumpet playing flutter tongue ascending lines inside her sound. In Part 3, the vocalizing extends to the trumpet part for a whispering duet before the soprano closes this remarkable recording with two haunting descending minor sevenths, perhaps in a rhetorical question, or an oblique assertion, as we contemplate the present and the future: “this….world.”

All music composed by Scott Wollschleger, published by Project Schott New York (BMI).
The music on track 2 is published under the title Soft Aberration no. 2.
Tracks 3, 5, and 8 are published as a single continuous composition without movement breaks. Trackks 1, 2, 3, 4, 5, 8 were recorded between October 2014 - November 2016 at Oktaven Audio, Yonkers, NY.
Tracks 6 and 7 were recorded May 12 at Sear Sound, New York, NY.
Recording engineer: Ryan Streber
Editing, Mixing, and Mastering: Ryan Streber, Hans Hsu, Anne Lanzilotti, and Scott Wollschleger
Produced by: Anne Lanzilotti, Scott Wollschleger
Executive Producer: Anne Lanzilotti
Album Design: Traci Larson
Painting: May I have this dense, by Lisa Abbot-Canfield, used with permission from the artist
Photography: Anne Lanzilotti, used with permission
This album was made possible with support from the Alice M. Ditson Fund