Some Consequences of Four Incapacities 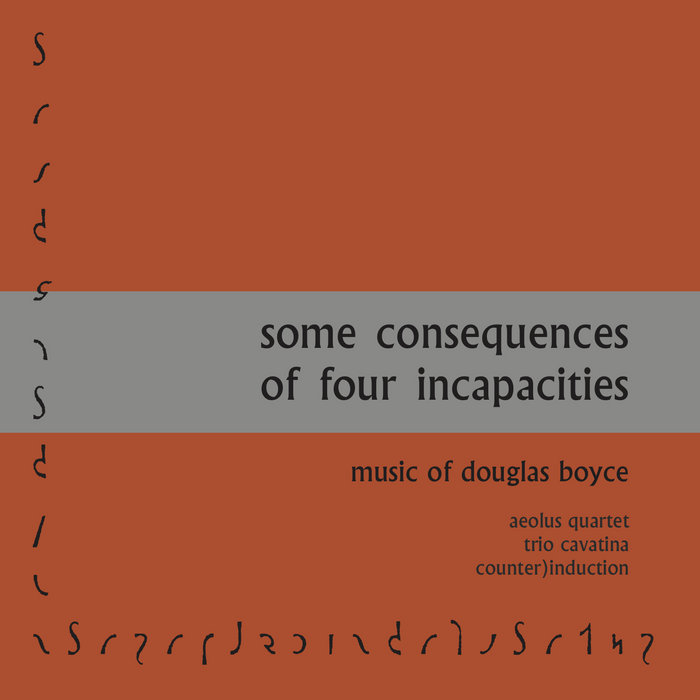 Composer Douglas Boyce, composer-in-residence of acclaimed new music ensemble counter)induction, releases his debut portrait CD, featuring three of his kinetic chamber works in riveting performances by counter)induction, Aeolus Quartet, and Trio Cavatina. Boyce's music reflects a wide array of interests, from Renaissance traditions to modernist aesthetics, embedding these influences in works that oscillate between tightly organized ensemble mechanisms and carefully curated moments of independent instrumental freedom. Boyce opens the program in a haze — specifically the murky intersection of 102nd & Amsterdam. Ponticello tremolos dart around the ensemble, and one can imagine standing on the city corner, peering this way and that in response to sounds and darting figures in the charged nighttime atmosphere. A poignant cello solo follows, a balance between imploring high notes and shaking glissandi and admonishments in the bass. The glissandi find their way into all the parts for a lampoonish subsequent section, leading into a densely energetic, chromatic passage. The eerie atmosphere of the opening returns as this portrait of an urban crossing beautifully captures how one spot in a city can contain an entire universe. PIano Quartet No. 1 begins with Bartokian off-kilter accents, alternating with hocketed passages between viola and piano. The texture gets progressivley more dense as lines snake in and out of the ensemble, before a passionate passage leads back to the fervor of the accented opening. Fortuitous Variations opens with similarly angular music, pillars of repeated octaves in the piano alternating with swooping gestures in the strings. The subsequent variations subject the material to all manner of manipulation, from timbral, to rhythmic, to registral. Movement two opens ephemerally, with the piano articulating muted harmonics inside the piano and the strings playing delicate glissando harmonics, before growing into a tapestry of dialogue between three voices, sometimes conversing with each other, and sometimes with themselves. Movement three is a solemn hymn, grounded throughout by a somber pulsing of chords in the piano. The closing movement and the last track on the recording accumulates slowly, first with violin alone, then adding cello, before the piano joins for a richly contrapuntal section, saving its wildest moments for near the end of the movement. The work closes with pensive chords, leaving the listener with a sense of a composer who does not feel the need to clinch a closing statement, preferring to leave with questions hanging in the air. Douglas Boyce is a composer with a powerful focus and impetus in his music, but also a fantastic capacity for expressive range and an uncanny ability to sustain complex rhetorical arguments within his sophisticated structures.