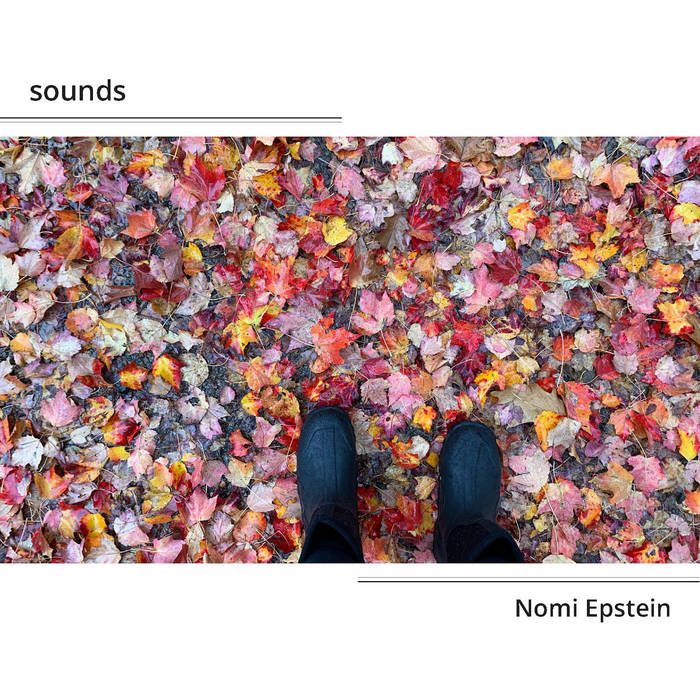 dougz Like nature playing through human hands and voice turning instruments of sound into the music of being.

Nomi Epstein’s work exists beneath the superficial expressive armor that dictates much of our communication, musically and otherwise. She writes music that is fragile and penetrating, demanding that the listener release our collective fixation on mental quickness and information density and sit still, sometimes uncomfortably so, with sound, phrase, and silence. On this portrait release of her music, “sounds,” we are given the opportunity to hear these artistic convictions through the lens of her piano music as it contrasts with two experimental ensemble works.

The album opens with Till for solo piano, a solo piano work performed by Reinier van Houdt (who also performs the other two solo works). Feldman’s presence is felt in subtle syntactic changes over phrase repetitions. But Epstein is not bound by any preconceived process, freely venturing away from an established phrase structure for a poignant tolling dyad. After only ninety seconds, the work gets “stuck” on a six note ascending arpeggio figure for nearly three minutes, reveling in repetitions in which variable accents are the only changing parameter. If Feldman’s orders and reorders notes like words in a Virginia Wolff text, Epstein draws attention to how our perception of the same ordering shifts depending on emphasis. The subsequent section explores a similar phenomenon, now mapped onto accented dyads that occur at variable intervals over a steady pulse. Till closes with a series of slow repetitions of one unsettling chord, basking in the complex resonance it leaves in its wake.

for Collect/Project explores a different side of Epstein’s work, albeit one that is very much focused on sound and silence. Scored for voice, bass flute, and live electronics, Epstein creates small sound sculptures from the hybrid timbres emerging from the three performers. Opening with croaking and fluttering vocal techniques, the listener is immediately brought inside the direct tactility of sound in a way that makes the piano sound like a tool of sonic abstraction. Sustained tones and descending glissandi form composite sounds that blend the brittleness of the voice, the warmth of the flute, and the coolness of the electronics. Electronic white noise washes over the texture midway through, obscuring texts as the flute merges into the texture with its own air techniques. Flute and voice alternate fifths that slowly compress before a series of overlapping figures oscillating at different rates to close the work.

The two part Solo for Piano is a study in contrast, from the rumbling low register gestures of “Waves,” to the patient unfolding of sonorities in “Dyads.” The waves of the title in the first part are generated by the two hands playing close together on the bass end of the keyboard in a “continuously changing rhythmic gesture.” After each phrase crests, the murky resonance hangs in the air, before a new phrase washes over once again. “Dyads” contains a series of over-ringing two note chords, registrally separated but rhythmically regular. The seventeen minute work is hypnotic but not static, possessing a compelling level of variety within its self-imposed restrictions.

sounds for Jeff and Eliza for flute, bass clarinet, and piano (with Epstein at the keyboard) returns to the world of exquisite sound objects heard in for Collect/Object. The absence of electronics and the focus on multiphonic sonorities lends this work a more austere tone. The microscopic focus on the interaction between the three instruments makes each entrance consequential — does the piano enter first and the winds join its resonance, or are they separated to momentarily disentangle their sonorities? The sparseness of rhythmic and gestural contrast is balanced by the complexity of each composite gesture.

“sounds” concludes with another solo piano work, Layers for Piano. The piece shares the suspended, ethereal quality of “Dyads,” but features a three layered notational construction. The top layer, a single note floating melodic line, is the only layer that is metered, written with specific note values and rests. The other two layers are notated spatially -- their rhythmic organization is meant to be placed around the top melodic layer. The second layer contains single staccato notes that shadow the melody, written as quarter notes on specific pitches, and the third layer contains watery chord clusters, notated as gestures which indicate register and interval span but not precise pitch. As the piece unfolds, the clusters migrate around the register of the piano and become more variable rhythmically and with respect to articulation. Throughout, Epstein’s compositional focus seems to be as directed towards the rich resonance vibrating inside the piano as to each newly introduced pitch.

The music on this collection is uncompromising, not in its impenetrability but in its refusal to pander. While the sound of van Houdt’s piano defines the world of this recording, the two ensemble works confirm Epstein’s focus, albeit from varied directions. Epstein’s expressive world insists on quieting the mind and opening up to subtleties of sonic detail. A listener’s willingness to forego an expectation to be entertained by extroverted sound is duly rewarded by the sublime experience of her poetic compositions.