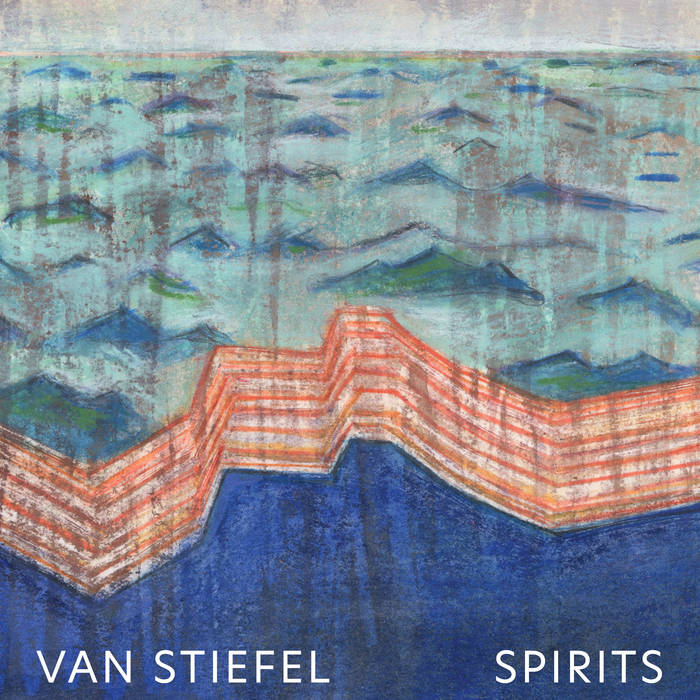 Composer and guitarist Van Stiefel's Spirits is his unique take on the studio-instrumental albums of layered guitar by legends like Les Paul, Chet Atkins, and Glen Campbell, filtered through his own introspective and personally spiritual approach to the instrument. Those albums were often a series of vignettes, each tune suggesting a particular location, mood, or flavor. This album turns that form into something akin to journal entries that hint at secrets, idiosyncrasies, and personal rituals.

"I’m lucky that over the years a lot of great guitar players have performed or recorded my music, but with Spirits I have endeavored to compose, perform, and produce all the tracks. As a child I loved the studio-instrumental albums of layered guitar by legends like Les Paul, Chet Aitkens, and Glen Campbell, and these are remembered here in my own introspective and personally spiritual way. Those albums were often a series of vignettes, each tune suggesting a particular location, mood, or flavor. This album turns that form into something akin to journal entries that hint at secrets, idiosyncrasies, and personal rituals.

In King of Cups, a lap-slide melody is accompanied by an electric guitar track much cooked by custom processing, pedals, and re-amping. For Memory Jug and Pink Cloud, acoustic guitar samples recorded in an oddball tuning are reordered along with other computer-generated sounds and samples into backing tracks. Memory Jug is named for the three-dimensional collage technique involving little objects and talismans embedded to the surface of a jug, memorializing the dead and providing personal items for a journey to the spirit world. An optimistic lead in Pink Cloud is set against a stormier backing track, implying a darker reality than the lead is willing to admit. Longer acoustic samples make for a spare duet with electric guitar in Ghost Flare, named for that artifact of filming in sunlight where concentric circles of light expand and shift diagonally across the frame like thought bubbles.

Cutting and pasting fragments to build a new story also influenced how a series of electric guitar solos were composed. Interspersed throughout the album, these brief snapshots of a state or quality are fragmented and have little repetition (Solace, Acquiescence, Consequence, Clairvoyance, Luminescence, and Severance). Like aphorisms, they are points of no return: effects, outcomes, and conclusions without a story. For Clairvoyance, I made an animation using John Conway’s Game of Life as a point of departure for an abstract drawing fantasy.

In contrast, another group of pieces (Jewel Tree, Spirits, Ground and Harbor) unfold “in their original time” as realized processes. Jewel Tree is a duet for electric guitars, one part using a tremolo technique to generate a glittery surface for an otherwise tumultuous and passionate musical narrative. In Spirits, sustained tones trigger varying tremolos that haunt a polyphonic melody with patterns that play with pacing.

Processed piano samples in Harbor create a rhythm that is neither mechanical nor organic but somehow both to my mind. Harmony projects emotion onto Harbor’s varied, though indifferent, rhythm. Meanwhile long, sustained guitar tones measure both the harmony and the rhythm. The piece makes me think of how captivating vistas are unchanged by the emotional states we bring to them; we self-soothe somehow by viewing a vast space too large to control or fully take in.

The album closes with Ground for five guitars. I think of it as a kind of resolute epilogue. To me, the simple clarity of its form and timbre lifts a veil that enfolds the other pieces.

Cover art by Caroline Lathan Stiefel, to whom these pieces are dedicated

Special thanks to Lew Ledyard