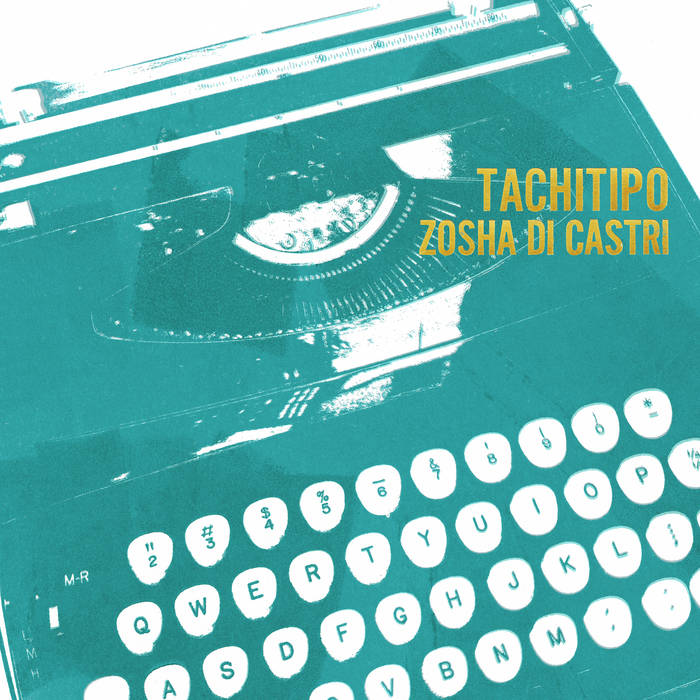 Composer Zosha Di Castri’s debut album “Tachitipo” features several of her eclectic chamber and solo works, both acoustic and electro-acoustic, written between 2010 to the present, and in performances by top-notch ensembles and artists (mostly New York-based) who have long-standing collaborative relationships with the composer.

Di Castri’s music reflects her restless intellect, and her compositional process is often expressed in terms of working through an abstract extra-musical idea through sound. These sound-thought experiments extend to her compositional methods themselves, often birthing and developing her music in close collaboration with her performer colleagues, as is the case with many of the works on this recording. “Tachitipo” also features a unique collaboration with one of the top recording engineer-producers for classical music, Martha de Francisco, and the internationally recognized conductor, Lorraine Vaillancourt, founder and musical director of the Nouvel Ensemble Moderne in Montreal.

The opening track on the recording, The Animal After Whom Other Animals Are Named, was written for the vocal ensemble Ekmeles and explores aging, both as a function of the voice but also in a more general sense. Using a wide range of vocal techniques that alternately focus on timbral idiosyncrasies and theatrical possibilities, Di Castri creates unusual textures that are in constant flux. Text fragments are looped and layered, sometimes featuring the sonic qualities of the words as divorced from their content and sometimes highlighting their semantic meaning in a more direct fashion.

Throughout Cortège, an ensemble work written for thirteen players, we hear Di Castri returning ominously to a haunting sonority that serves as a pivot to all of the other material in the piece. Of the work, she writes, “composed in a block-like manner, contrasting textures are juxtaposed in a rich sonic patchwork.”

Of all the works on this recording, Quartet No. 1 is the least programmatic in the sense that it is not a manifestation of an extra-musical concept realized in sound. Grounded in a compositional process that involved experimenting with sound files in an audio editing software, Di Castri has created a tactile, highly detailed library of string quartet sounds that are fresh and unique to this piece. The work toggles between these meticulous textures and moments of ethereal suspension. The quick shifts between contrasting materials create a rich landscape as the moments in the piece unfold and also trigger the listener’s recollection of material that has receded and later reasserted itself.

Describing Dux, Di Castri writes, “using falling cyclical canons that grow in complexity, and energetic outbursts from the extremes of the instrument, this piece can be read as an abstract reflection on the political climate in the U.S., the year it was written (2017).” Disjunct, mechanistic phrases combining glissandi, dense chordal sound masses, and wide registral leaps give the piece a vigorous physicality. Underlying the surface energy is a metaphor between the “leader” (dux) and “follower” (comes) in a traditional canon and the blind allegiance we witness in populations eager to step in line behind an autocrat.

La forma dello spazio for flute, clarinet, piano, violin, and cello, is inspired by the mobile sculptures of Alexander Calder and Lee Bontecou. Di Castri writes, “I wanted to create a composition in which musical gestures appear to be fairly static, yet are permitted a certain flexibility. Alluding to the idea of mobiles, La forma dello spazio has the musicians spatialized around the room.”

The title piece, for the two-pianist, two-percussionist quartet Yarn/Wire, is a “reflection on writing and the machines we use to execute our ideas.” Di Castri turns to the vintage manual typewriter as her inspiration for building a vocabulary of sounds. Tachitipo alternates between quasi-improvisatory textures featuring microtonal washes of pitch to tightly controlled, rhythmic ensemble mechanisms. At twenty four minutes, it is a monumental piece spun out of a meditation on work that progresses incrementally, one key stroke at a time.

Editing and mixing: at the Schulich School of Music at McGill University and CIRMMT