The Hunt by Night 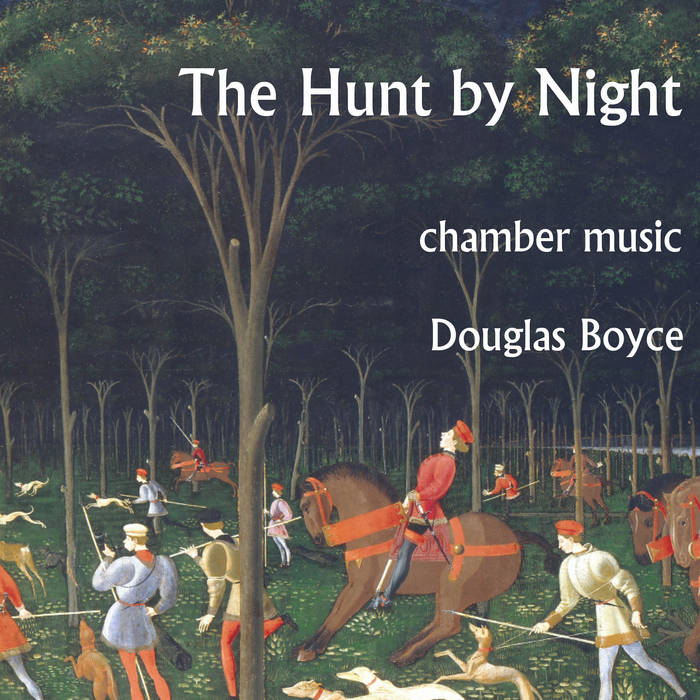 Composer Douglas Boyce releases his second recording of chamber music that draws inspiration from many sources — early music forms and techniques modernized for the present, dynamic chamber music interaction, and rich interpretations of poetry, painting, and philosophy. Boyce uses all these to create a multilayered tapestry of sound and ideas.This collection includes performances by counter)induction (the ensemble he co-founded), as well as Trio Cavatina, Beth Guterman Chu, and Schuyler Slack.

Douglas Boyce’s Quintet l’homme armé is created from a 15th c. melody of the same name. The piece is roughly in 2 halves. The first opens full of a bright edginess, streaming freely from a manic clarinet, all shrieks and flourishes. The second explores a quieter side of the instruments — introspective, transparent. The clarinet’s shrieks turn to moans. It is not that the intensity has bled out, it is still palpable. We now hear only its trace, a shimmering filament held taut.

Stretto Perpetuo is part of Boyce’s large scale Book of Etudes project. Boyce works closely in collaboration with engineer Ryan Streber, and it shows. The precision and clarity of the recording spotlights the full timbral mastery of cellist Schyler Slack: a heavy bow that is caustic, almost severe; a throaty and muscular pizzicato, a wonderfully bitey articulation that sounds like a bad scraped knee feels. Boyce balances the sharp edges with starry, gentle chord sequences for the piano. Pianist Ieva Jokubaviciute’s wide panorama of tone — pastel, rounded tones for the highly-voiced chords, and steely hardness for the midrange punches — enlarges the piece such that it sounds like more than a duo. But the insistent ostinato returns, with its sleight-of-hand syncopations. Even a gossamer coda is infiltrated by that ostinato, seemingly trying to start something, only to spirit off into the distance.

Boyce’s Piano Quartet No. 2 begins with writhing glissandi in the strings, punctuated with piano calls. They increase in volume and insistence, toward a breaking point, only to recede slowly. The gambits are varied — a jangling piano overtakes the writhing strings, a passage of high violin grows increasingly aggressive and subsumed by bouncing, insistent eighth notes, the whole lot subjected to “heavy messing” (Boyce’s marking). The last farewell slowly unwinds over the last two minutes of the piece, leaving us in an alien, suspended world, full of memories.

Sails Knife-bright in a Seasonal Wind is dedicated to Boyce’s son, a dreamy and dramatic four year old when the work was composed. In much of Boyce’s work, motive is presented as a process; here motive stands as gesture, a statement of its own. The spareness of the work brings into relief the three very different characters of the violin, guitar and percussion, and allows for the varied timbres and combinations to speak clearly. Elsewhere, the instruments interact so tightly as to sound like a single organism. Especially arresting are moments when the sonic border between one instrument and another is unstable; another affecting moment happens about three minutes from the end, when an imitated line is slowly mapped onto violin and guitar.

Boyce’s The Hunt By Night is the final piece in his wide ranging set of 21 Etudes. More than abstract music, it is an aesthetic, poetic conversation with the painting by Paolo Uccello (1470) and the poem by Derek Mahon that shares its name. This “modern caccia” is vibrantly alive. Along the way, roles change, instruments group and regroup, but the energy of the chase cannot be contained. The heat of the pursuers and the pursued is there, along with the sudden quiet moments of suspenseful waiting. Tempo markings “ill-advised” and “fully-fanged, target oriented” intensify the atmosphere. All of Boyce’s Etudes assume virtuosity on the part of the players, and this is no different. These players swing us between the stylized dimensionality of the painting and the smooth space of the chase, all switchbacks and takeovers and leaps through the rhythmic patterning of the forest.