The Making of Americans 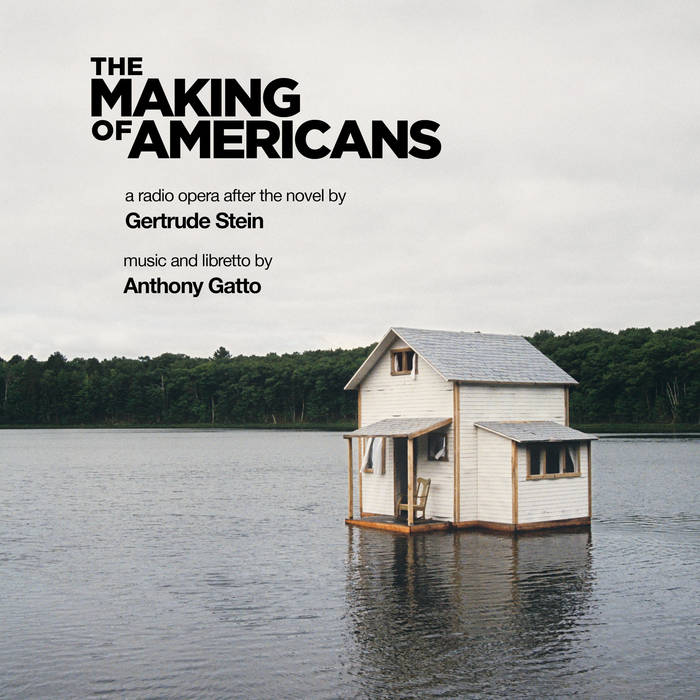 ‘Soon now there will be a history of every one who ever was or is or will be living.’ (Stein)

Stein’s 1930s recorded readings from the novel perform the role of the Narrator in the opera. She embarks on the romance of recognizing "Every one who ever was or is or will be living"—Track 3. What if there were such a story of utter inclusivity in America? "A history of every kind of men and every kind of women and every way any one can think about them.” If her aspirations were ever fully realized somehow— the universal recognition of every one—there would be a great reckoning to behold.” - Anthony Gatto

Gatto’s musical setting for Stein’s The Making of Americans is appropriately eclectic, embracing diverse sound sources and stylistic approaches as threads in the multi-colored quilt that is America. Propulsive minimalism, ethereal vocals evoking church motets and liturgical singing, stately choral passages in the strings, Ivesian layered harmonic progressions, electronic jump cuts, and glitchy effects combine to create a visceral paean to a troubled history. In this “radio opera” context Gatto’s use of repetitive fragments of text read by Stein points in several directions. It is consistent with traditional operatic librettos, in which arias are often long on repeated text and short on plot development (saved for the recitative). One also hears the influence of text based electro-acoustic works in the vein of Different Trains by Steve Reich, wherein the spoken fragments serve the function both of providing semantic context as well as becoming an additional sonic element in the musical fabric. Lastly, it establishes a multi-dimensional narrative structure where Stein provides framing while the listener is brought in and out of the main story, a chronicle of the trials and tribulations of two American families.

The dynamic first movement serves as a template for Gatto’s eclectic approach. Accented verticalities in the strings function as a call to attention introducing Stein’s quasi-rhetorical questions —“What is a normal American?” Exuberant moto perpetuo material segues into disembodied vocals saturated in delays; a new narrative voice is introduced and is interwoven with choral passages and processed vocals over ethereal sustained chords. A pulsing heartbeat can be heard behind jagged proclamations of the text, “I like loving, sometimes,” and “everyone is a brute to someone,” before Stein reappears briefly and Gatto closes the movement with an expansive, triumphant chorus with a tonal chord progression that is nevertheless misaligned, ecstatically layering different functional harmonies over each other at once. Gatto’s penchant for repetition organized within a collage texture fits Stein’s circular rhetoric while also establishing a heterogeneous chaos that captures something of the promise, and the unruliness, of America.

Excerpted recordings of Gertrude Stein readings from The Making of Americans, and an Interview (1934)

Special thanks to Chris Larson for the album art from his work Crush Collision.