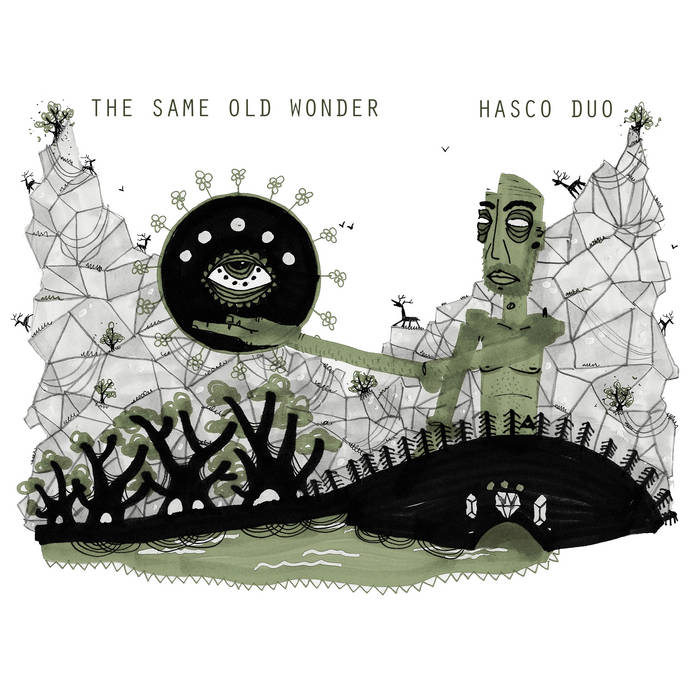 Voice and guitar ensemble Hasco Duo (Amanda DeBoer Bartlett, soprano, and Jesse Langen, guitars) experiments with traditional roles, using the conventional storytelling model of text setting as a launching pad to push boundaries into unconventional territory. “The Same Old Wonder” is a document of a selection of exploratory repertoire that they have been instrumental in bringing to life.

Ravi Kittappa’s Und wenn du lange in einen Abgrund blickst… for voice and electric guitar opens the album with a sense of childlike play. The electric guitar lightly taps pitches along the string with a pick, and the voice imitates, as if the two are discovering ways of producing sound together at the same time. The title quotes an ominous passage from Friedrich Nietzche’s seminal work, Beyond Good and Evil (translated loosely as, “when one stares into the abyss, the abyss also stares back”). After the opening, Kittappa and Hasco bring us down into that abyss, with heavily reverberant sustained textures facilitated by Langen’s battery of effects. DeBoer Bartlett ventures into melismatic flights accompanied by a guitar riff that grows more distorted and disjointed as it ascends in register. The work closes in stasis as a wavering tone flat lines and fades out.

The duo’s own composition Wildflower brings the album more towards the storytelling side of their work, with DeBoer Bartlett’s modal melody accompanied by ambient halos of sound from Langen’s guitar, which become more layered over the course of the song. Langen assumes the melodic role briefly midway through, with a sound shrouded in delays and slight pitch bending. Each time the vocal melody returns, Langen varies his accompaniment, taking us on a journey through several sonic approaches to electric guitar effects. Wildflower has a cinematic quality — an earnest, grounded folk song asks the questions, “Who am I?”, “Who loves me?”, amidst a swirl of unmoored sounds.

Morgan Krauss’ pallid tongues melds the intense urgency of spoken word with a dense, synthetically distorted electric guitar part. The first three minutes of the work tumble forward breathlessly, bringing us inside a forceful and agitated protagonist’s mind. The texture pauses for a moment while the voice breaks the fourth wall to speak words directly to the listener: “Sometimes we have to avoid thinking about the problems life presents. Otherwise we’d suffocate. Banality is sometimes striking.” The subsequent section features chords played with a reverse effect that fade in as they accumulate pitches while texts are uttered in broken syllables, emphasizing the intimacy of individual consonants and sibilants.

Luis Fernando Amaya’s Tinta Roja, Tinta Negra / Red Ink, Black Ink moves in slow motion, communing with “ancient voices, silenced and lost to perpetuity.” In the opening of the work, sustained tones are passed back and forth between guitar with an ebow and voice, as resultant beatings highlight subtle pitch discrepancies. Over time, Amaya introduces pitches in different registers to add dimension to the increasingly immersive texture. DeBoer Bartlett eventually enters with powerfully plaintive wails against crashing sounds in Langen’s part, a poignant textural idea that returns throughout the work. While the piece is largely ethereal, Amaya pointedly avoids settling into any resolved harmony for long, preferring unsettling shifting verticalities that speak to his score indication to “resonate…, beautifully or horribly, and listen.”

The final work on “The Same Old Wonder” is Jonathan Sokol’s Basic Lands, a twenty five minute modular game piece with texts taken from the book The Prairie and the Sea by William Quayle. The rules of the game are modeled after the Magic: The Gathering card game and involve drawing of cards that indicate independent phrases in the voice and gestures in the microtonally tuned guitar part. The work begins and ends with the same vocal passage, but otherwise the ordering of the voice material is variable from performance to performance. The guitar part consists of five “draws”, each consisting of five short gestures that the performer is encouraged to improvise around. Langen’s realization of these fragmented gestures possesses an admirable flow, building a linear logic through the chance materials. The soprano material presents itself conventionally, akin to art song, while the the experimental sound sculpting in the guitar part establishes a subconscious context for the narrative content of the text. While individual performances of the work will inevitably be variable in their realization, the dichotomy between concrete and abstract is cleverly built into the nature of the material between the voice and guitar.

“The Same Old Wonder” is a debut statement by an ensemble that is consciously interested in deconstructing the conventional expectations associated with a voice and guitar duo. Combining influences from Chicago’s fertile experimentalist scene with a refreshing eclecticism, Hasco Duo promises to carve out a distinct and unique space while bringing new repertoire to a time honored instrumentation.