the script of storms 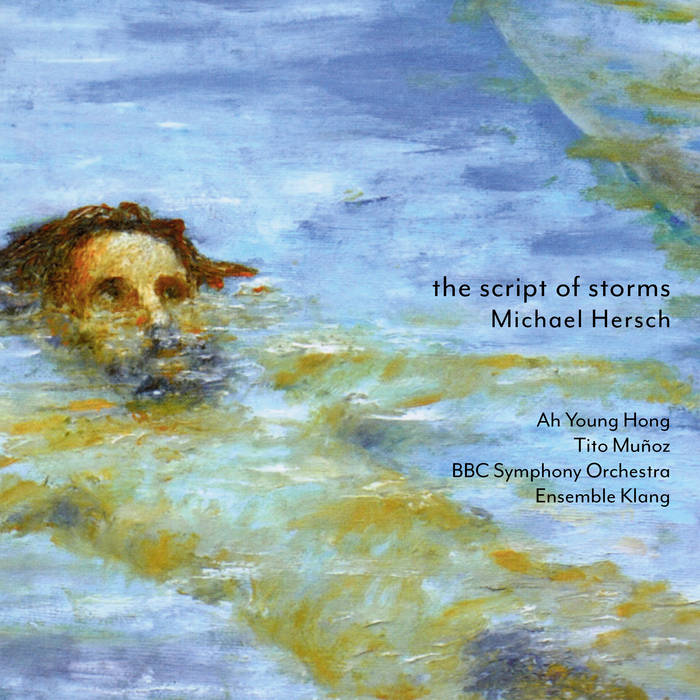 "Hersch's music gets under the listener's skin like no other ... the voice is central, but a voice that sounds like an instrument and that miraculously merges with the instruments, a technique that is tailor-made for Hong ... the intensity goes through marrow and bone." - NIEUWE NOTEN

"Hersch, the most poetry-driven of composers, set some of the darkest passages in Karim’s work ... a scene the poet witnessed as a child in Baghdad ― which comprises dragging a mutilated corpse through the streets ... a landscape that appears still and blanched ... a paroxysm of cries and frantic wings. The way the double basses suddenly have a two-note tune that aches gutturally as if straining from a swamp; its neck taut with the effort of utterance. Those twisted fanfares in the brass as if an entire regimental band is being crushed in a fist. And the voice, like a mother at the foot of a bloodstained wall ... upon hearing Ah Young Hong for the first time, Karim ... became obsessed with the progress of a composition that would serve as a vehicle for her remarkable voice. It was striking to observe how the most painful moments in his poems were delivered in high, piercing notes that seemed to obliterate the words themselves as if their fullest expression were not allowable." - PN REVIEW

cortex and ankle and the script of storms belong to a relatively new commitment to the voice in Hersch’s work. After years dedicated to instrumental music, he has written 14 works with voice since 2012. Many of these were written with Ah Young Hong in mind, the soloist featured here.

Soprano Hong has performed a diverse spectrum of repertoire in both chamber and concert environments, from Monteverdi and Bach to Haas and Kurtag. Her voice is protean in its musical and emotional versatility, which Hersch explores fully. In her highest range, Hersch gives her incantatory, extremely extended tones that float over the ensemble. Her voice is a searing beam of light, focused on the intensity rather than the comprehension of the words. Throughout she sings with a supple tone, melting into the timbres of the instruments. Mostly she sings without vibrato in these works, giving a bright innocence to her already clear-ringing voice. She confidently leans her voice into Hersch’s microtones as if holding a sharp object.

When the singing voice cannot contain what needs to be said, Hong relates it in unadorned, nuanced speech (“The dead are tangled in a heap, Scooped up and in and left to rot.”) What could a melody say about that?

Fragmentation and discontinuity are central to Hersch’s aesthetic. Rather than setting an entire poem, he mines the poets’ words, selecting lines that speak most powerfully to him. Musically, the songs here are incomplete - they are not so much movements as fragments, without their own self-contained trajectories. But neither is their sum total a completeness, the discontinuities suggest missing verses, musical lacunae. Hersch’s music exists after the catastrophe and there is no wholeness left to find. The work itself has been shattered and only shards remain.

cortex and ankle was composed for Hong on texts by the English poet Christopher Middleton (1926-2015), a seminal figure in Hersch’s development. The prologue opens like a slow-motion storm in progress. There’s no explanation for its intensity, and it quickly diminishes. It’s a way of transitioning to Hong’s gentle intonations in the next movement, an understated tune at first dispassionate, only lightly accompanied, that grows into insistence as her range increases. She rings out over the cataclysms.

This sixth and seventh movements share a clangorous, aqueous environment, all pipes and muted piano and low brass, shot through with piercing exclamations. As Hong sings, the pressure of the sentiment seems to push the ends of her phrases into speech, or whispering.

In many of these songs, especially in the quieter moments, Hong’s melodies are accompanied only by a simple piano line, or perhaps a single clarinet. However, just after the beginning of the eighth movement (“Visible through a gap in needles of juniper...”), listen for when high instruments suddenly surround her, like a weird and holy nimbus, a brief moment of beauty to be savored.

Composed for Hong, the script of storms was written after texts by the Iraqi poet Fawzi Karim (945-2019), a close friend and inspiration of Hersch. Much of Karim’s poetry, including this, is taken up with the bloody conflicts he witnessed in his early life.

The song cycle opens on a soft gray pallet of strings. We are jolted out of this foreboding by Hong’s exclamation, “The eye turns black.” Between the urgent instrumental waves a tragic loss of innocence unfolds - the poet is no longer shocked by the smell of burning human flesh.

The fourth song is aimed directly at us. Between screaming high woodwinds and low rumbling brass, Hong delivers the words with an accusatory tone: “You who avoid coming close, we would advise you to tremble…” We are witnesses to this horror.

In the final song, where “there was nothing there for me to look for,” the poet recounts his most terrible visions. Hong’s voice emerges seamlessly from the brass. Later, with all that has been seen, it is as if the possibility of song has dropped away, leaving the words alone except for knowing assent from the orchestra. Hersch leaves us with the most existential question of all: “Is the dawn to be?”