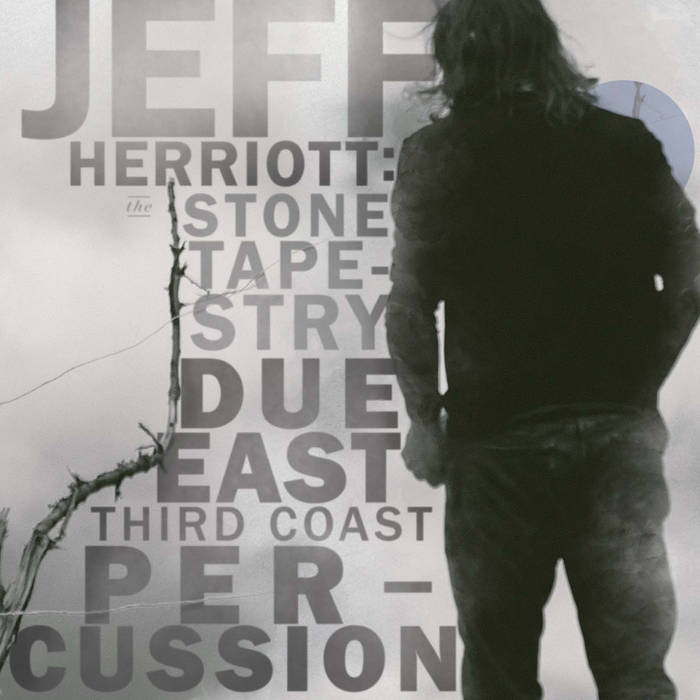 “The Stone Tapestry is a collection of interwoven myths, about origins, lifecycles, and the pace and significance of change. As a whole, the piece divides into two segments that together trace the path of just a few stones, from discovery to disappearance. Musically, several different ideas appear and recur in different forms, modeling change across large time spans. The ritualistic approach to the performance of many segments of the piece is intended to impart a distance to the act of music-making, placing focus on the repetitive nature of the physical acts themselves.” — Jeff Herriott

This remarkable one hour long piece in nine sections, commissioned by the Barlow Foundation, written for Due East and performed here with Third Coast Percussion, marries a timeless stance to sound and pacing with a very contemporary approach to timbre and instrumentation. Each movement patiently excavates a different sound world, unearthing subtleties and long structural shapes. But the sonic pairings are innovative, like the union of processed, undulating flute and bowed vibraphone in the third movement. Due East and Third Coast Percussion are ideal instrumentalists for this music, exploring the fine details in timbral shading as an archeaologist might examine an artifact. Herriott’s expansive formal process in The Stone Tapestry allows the work to breathe and inhabit the world of natural time. While the resultant sound of the music is very distinct, the temporal quality of the piece is reminiscent of the music of John Luther Adams. In this sense, Jeff Herriott joins Adams in allowing his music to draw attention to, and not away from, our natural landscape. Stones, like rivers, mountains, and valleys, move and change at a glacial pace, and Herriot’s deft use of repetition with subtle variation, avoidance of didactic rhythmic regularity, and penchant for static harmonic textures bring us into a sphere entirely apart from glowing screens, twenty four hour news cycles, and crowded metropolitan areas.