The Understanding of All Things 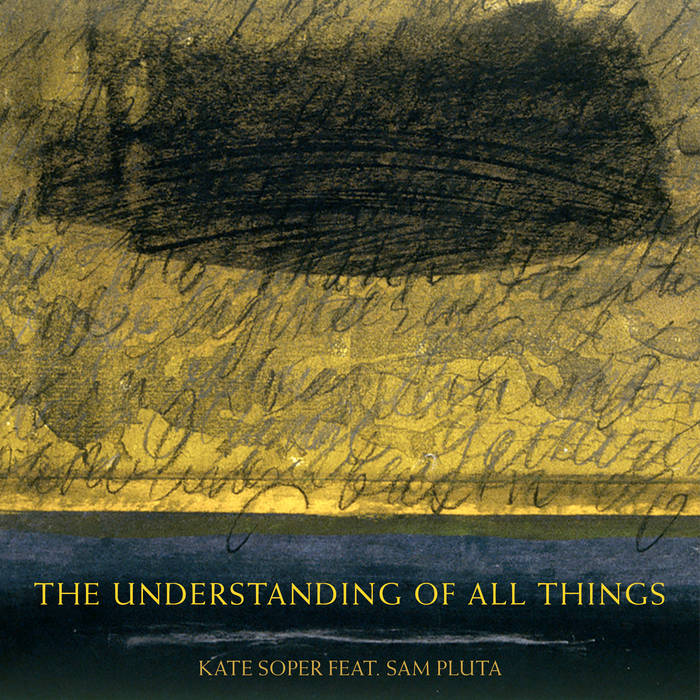 Composer/vocalist/pianist Kate Soper teams up with longtime Wet Ink Ensemble colleague composer/electronic musician Sam Pluta in this bracing collection that explores the ever shifting hierarchy between text driven and music dominated vocal work. Soper's distinct musical voice and characteristically clever approach to setting text in three original works are balanced by Pluta's ever inventive and sensitive marshaling of his unique arsenal of electronic textures as he joins Soper in two improvisations.


Philosophical inquiry is at the heart of Kate Soper and Sam Pluta’s The Understanding of All Things. Exploring the fluidity between text and wordless vocalizing, semantic meaning and abstraction, pitch and gesture, and sureness versus ambiguity, the two longtime Wet Ink Ensemble colleagues invite us into a discourse which ponders weighty, unanswerable questions. Drawing on texts by Kafka, Parmenides, Yeats, Berkeley, Frost, and Fred Lerdahl, Soper’s three through-composed works interspersed with two duo improvisations with Pluta expertly conjure a musical environment which facilitates contemplation of the ineffable.

Soper’s opening title track, for voice and fixed media, sets a Franz Kafka text in which a philosopher is fixated on a children’s spinning top as a microcosm of the nature of things. Her presentation captures the philosopher’s wonder, moving seamlessly back and forth between spoken and sung text, her voice opening up a portal to another expressive world as her diction freezes on an airborne syllable. Fragments of text show up in the electronics track, punctuating the texture from different sides of the stereo field, as if to mimic nervous synapses in our brain as we revolve around a complex topic. Soper turns to the electronics when words prove insufficient – filling in glitchy noises for consonants or distorting them through effects. At moments in the piece, the text recedes altogether into floating sustained vocal pitches and an ethereal background.

The centerpiece of the recording is Soper’s The Fragments of Parmenides for voice, piano, and fixed media. Dichotomies abound as Soper sets texts by Parmenides and Yeats and draws parallels and distinctions between their philosophical frames. The coquettish Yeats poem, “For Anne Gregory,” is set as a sentimental parlor song, while the Parmenides selection is a tempestuous fantasy, featuring swooping vocal lines and spacious piano voicings. In a nostalgic gesture, Soper brings back the opening Yeats parlor song towards the piece’s end, played through a speaker inside the piano, and detuned microtonally from the keyboard pitch.

Interspersed between Soper’s through-composed works are two improvisations, Dialogues I and II, with Sam Pluta. The first features a text by 18th century Irish philosopher George Berkeley in which he explores the nature of sensory perception through a conversation between friends. Soper begins narrating the track in an expository manner, with Pluta’s electronics coloring and punctuating the text respectfully. The civil discourse is eventually degraded as the improvisation begins to reflect the existential anxiety that lies behind metaphysical inquiry. Dialogue II remains wordless throughout, as Pluta’s arsenal of otherworldly sounds, Soper’s fragile, tactile vocal techniques, and the reappearance of the acoustic piano enter a freely expressive space that lies beyond cerebral rhetoric.

Taking the meta-awareness one step further, Soper closes the collection with a short work that tips its hat to her dissertation advisor at Columbia University, Fred Lerdahl. So Dawn Chromatically Descends to Day draws from Lerdahl essay on the complex relationship between text, music, and expression, before closing with a voice and piano setting of a Robert Frost poem, unadorned by either electronics or interstitial philosophical asides. After four works that stretch the boundaries of semantic musical meaning to make room for abstract inquiry, Soper examines the nature of text in music itself, before reaffirming its power with a wistful song.