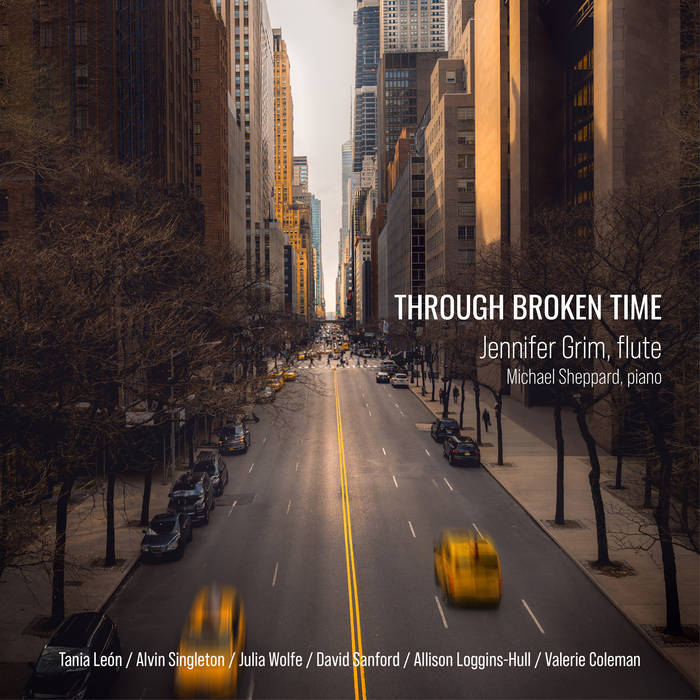 On Through Broken Time, flutist Jennifer Grim and pianist Michael Sheppard present a program that focuses on Afro-Modernist aesthetics. Composers Alvin Singleton, Tania Leon, and David Sanford represent an eminent generation of artists who merged influences from various corners of concert music, foregrounding arenas of African-American and Afro-Latin musical cultures, while Valerie Coleman and Allison Loggins-Hull exemplify an interest in more explicitly programmatic sources of inspiration. Julia Wolfe’s post-minimalist Oxygen ties the collection together through its inventive approach to layered composition for one homogenous instrumental timbre.

Tania Leon’s Alma, which means “soul” in Spanish, opens with freely impressionistic, exploratory material. Improvisational flourishes in both instruments are punctuated by lush seventh and ninth chords that function as phrase exhalations. Leon intensifies the character, introducing more angularity into the flute part, alongside flutter tongue gestures and other embellishing figurations. Eventually, the texture coagulates into a syncopated groove characteristic of Cuban music, with a joyful, energetic melody emerging from the pointillistic tutti accents between the two instruments. A return to the opening pensive material closes the piece.

Alvin Singleton’s Argoru series shares an affinity for comprehensive instrumental exploration with other iconic sets of works for solo performers, such as Berio’s Sequenzas. Written in 1971 while Singleton was a student at Yale, Argoru III unfolds in a rhythmically free context, developing two primary ideas — a mysterious, descending augmented triad, and fleet, ascending scale gestures. Singleton mines both for their rich character potential, and when we hear the opening descending motive return towards the end of the work, it is transposed and in a higher register, an emphatic statement of closure to this soliloquy.

Grim presents two works by David Sanford on this collection, Klatka Still, written in 2006-07, and Offertory, written for and commissioned by her in 2021. In the two movements of Klatka Still, a central pitch is circled like an idée fixe, in an accumulating fantasy in the first movement, and then in a swirling, kaleidoscopic texture in the second, careening towards a forceful finish. Offertory is inspired by long form improvisations by two iconic jazz saxophonists - John Coltrane and Dave Liebman. The opening movement begins with a mysterious unison melody featuring intervallic leaps, poignant pauses between phrases, and an enveloping resonance created by the piano’s sustain pedal. The flute plays evocative, improvisatory phrases over an ominous rumbling in the piano’s low register. The second movement is marked by an immediate turn towards increased intensity, starting with a virtuosic, energetic flute solo of fragmented modular motives. The piano enters with punctuated, angular chords, dancing along with and in between the flute’s kinesthetic phrases. Sanford’s adept ability to capture the spontaneity of improvisation in his rhythmic writing is infectious. The keyboard is given a solo turn, darting this way and that, as if to reconsider each harmonic nuance and metric inflection. The controlled energy of the movement eventually unleashes into unbridled fury with raucous repeated bass notes and cascading descending arpeggios before dispersing into disjointed utterances, breath sounds, and three short closing flourishes.

Allison Loggins-Hull’s Homeland and Valerie Coleman’s Wish Sonatine both engage with historical and social events as sources of inspiration and response. Loggins-Hull’s solo work references some recent turmoil from both natural disasters (Hurricane Maria in Puerto Rico) and manmade crisis (the Syrian civil war). The musical material remains focused on tonal elements throughout, symbolizing an anchored sonic “home” as a respite from external trials. Coleman’s Wish Sonatine is a setting of British-Guyanese poet Fred D’Aguiar’s “Wish” from The Rose of Toulouse, which depicts the Middle Passage of the Atlantic slave trade. Coleman’s evocative music is narrative and cinematic, capturing tumultuous waves, the fragility of a sea battered ship, and the violence of an inhuman industry. The piece rushes forwards, dramatically propelled by vibrant rhythms as well as the force of its powerful subject.

All tracks were recorded at Gusman Concert Hall, Frost School of Music, University of Miami, January 6–12, 2022