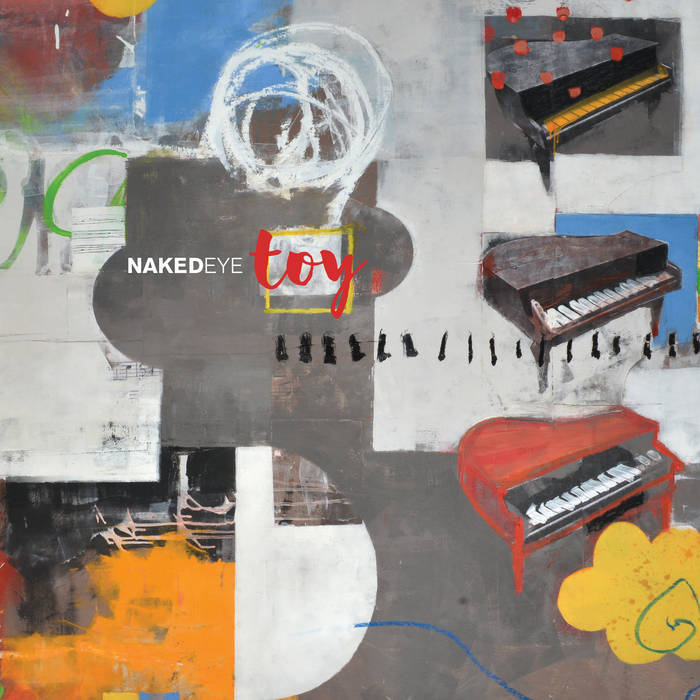 Lancaster, PA based NakedEye Ensemble releases their latest recording, “Toy,” featuring their artistic director, Ju-Ping Song, in works for toy piano that highlight its versatility as a solo instrument, in ensemble, and as a catalyst for experimentation. The repertoire on the recording covers considerable stylistic ground, placing the instrument in contexts that highlight both its capacity for intensity and whimsy.

The recording opens with Ge Ganru’s Peking Opera-inspired melodrama, Wrong, Wrong, Wrong!, for voice and toy instruments. The bell mechanism of the toy piano creates a ceremonial atmosphere, as other toy instruments reinforce the setting over which the inflected vocal performance unfolds. Various percussive effects, glissandi on a zither, and a brief toy accordion passage are among the many colorful sounds integrated into this engaging, narrative driven work.

Erik Griswold’s Gossamer Wings includes five other members of the NakedEye Ensemble. Joined by saxophone, electric guitar, flute, cello, and percussion, the toy piano takes a soloistic role in the eclectic piece. The opening movement, “Spinning,” is suggestive of incidental music to accompany a film or onstage action. A wry humorous march anchors the second movement, “Suspended,” and the final movement, “Moon Dancing,” centers on a repetitive groove articulated by toy piano in conjunction with a quirky battery of percussion across different registers, with a middle section featuring the melodic instruments.

Rusty Banks’ Babbling Tower to Tower begins with short improvisatory fragments on the toy piano, before the live sound is sent through a cell phone, as the signal goes out to a third party and then receives it back and acts as a speaker for the processed sound. Percussive effects on the body of the toy piano initially serve to demonstrate the filtering, before Banks reintroduces the musical material from the intro, triggering a unique halo surrounding the performed sound reminiscent of flanger and delay effects from guitar pedals. The musical material becomes increasingly insistent as it reaches a climax, before retreating to the fragmented phrasing of the introduction, alternating between pitched and percussive material.

Richard Belcastro’s Knock ‘Em Back for modified toy piano and electric guitar is emblematic of his joyful embrace of influences from the world of classic rock. The opening movement features fuzz laden bluesy riffs, and the second is an oblique pas de deux between sliding and bent notes with an e-bow and short articulations on the toy piano. A very quick tremolo effect obscures the guitar timbre in the next movement, shading jangly rhythms in the two instruments. Delay effects lay down a heavy pulse in the following movement as the toy piano articulates interlocking rhythms on the keyboard and with auxiliary percussion sounds resulting from the modifications to the instrument. Movement six features glissando effects on the toy piano, with the guitar providing a sonorous pad of clean harmonics. The final movement returns to the distorted sound world of the earlier movements, an angular jousting match between the instruments.

Jan Fedderson’s Ujoforyt closes this recording with a relentless torrent of arpeggiated notes on the toy piano. The composite sound of this level of velocity of notes on the instrument lays bare the percussive mechanical apparatus of this instrument, displaying its capacity to be so much more than a mere toy in the hands of a virtuoso performer and creative composers, such as Ju-Ping Song and her colleagues.