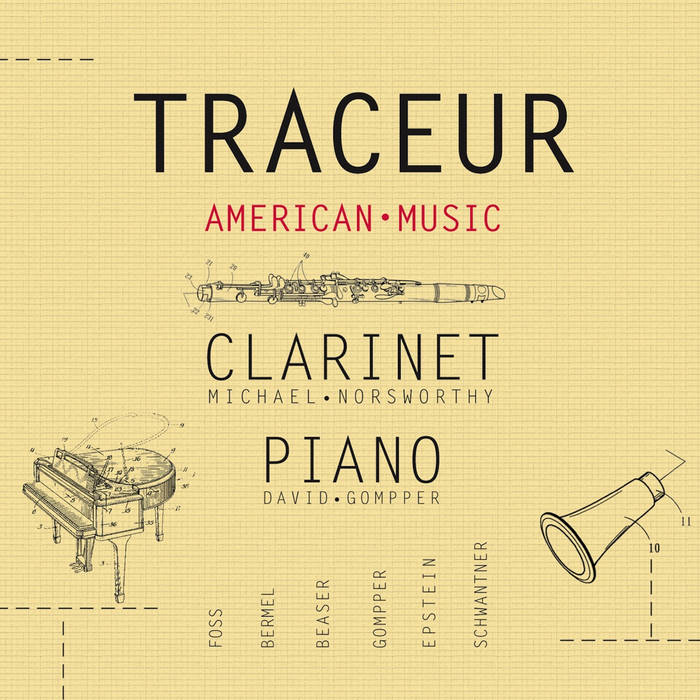 Clarinetist Michael Norsworthy (Boston Conservatory) and pianist and composer David Gompper (U. of Iowa) join forces to release “Traceur,” a survey of music by American composers that engages with vernacular sources and associations. A mix of premieres and first recordings of new transcriptions for clarinet, Norsworthy and Gompper capture the expansiveness, nostalgia, and nascent optimism of American music with these committed performances.

Though the list of composers on this recording draws heavily from the modernist community, these particular pieces evoke the lineage of Aaron Copland’s Americana work somewhat more than the rough collage style of Charles Ives. Robert Beaser’s Souvenirs, originally written for piccolo and piano in 2001, and later transcribed by the composer for clarinet and piano, is a collection of six loosely related ‘Songs without Words’. Written in Beaser’s ‘folk style’, which he first utilized in his oft performed Mountain Songs for flute and guitar, ‘Cindy Redux’ actually comes directly from that earlier cycle, while ‘Lily Monroe’ is similarly based on an Appalachian tune, recontextualized. The other four movements are wholly original, and sing in deceptively simple, strophic voices. German born Lukas Foss emigrated to the United States at a relatively young age, and his early work Three American Pieces reflects his youthful enthusiasm for his adopted country. Joseph Schwantner’s Black Anemones was originally a movement of a soprano and piano work written for Lucy Shelton, and is heard here in Michael Norsworthy’s transcription for clarinet. Marti Epstein’s Nebraska Impromptu was written at Norsworthy’s request and evokes the composer’s home state landscape. Derek Bermel has championed new clarinet music as a virtuoso performer on the instrument, composer, and curator. His SchiZm, originally for oboe and piano, is eclectic in its stylistic range, with a Middle Eastern flavored opening movement followed by a collage of elements from salsa, klezmer, and tango. David Gompper’s Traceur takes inspiration from a different kind of phenomenon, the art of Parkour, a unique discipline involving fluid, choreographed navigation of the urban landscape. Less expansive and nostalgic than the other repertoire on this disc, Traceur nevertheless captures the optimism so characteristic of American music and, in its references to jazz, points to an alternative well of inspiration for composers.