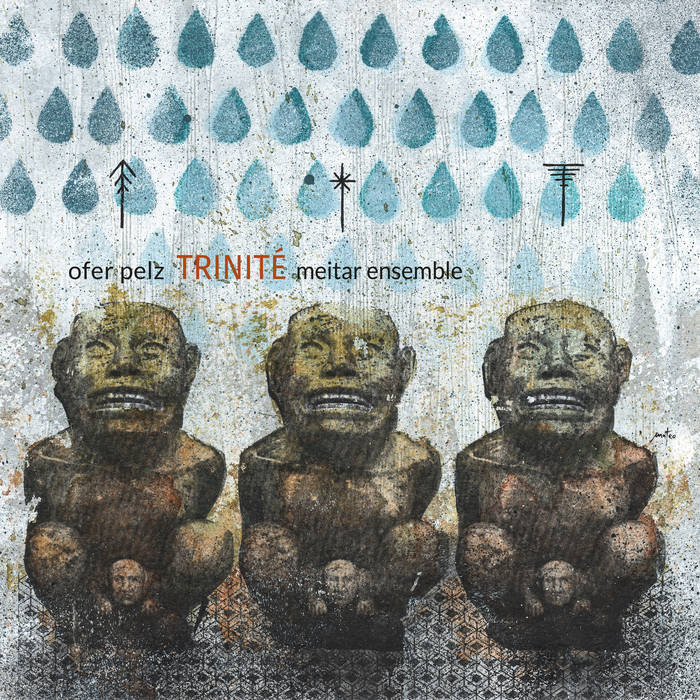 Composer Ofer Pelz celebrates an eight year collaboration with Israeli based Meitar Ensemble with Trinité, a collection of five works that highlight Pelz' intricate hybrid ensemble textures and deft command over applying repetition with variation to looped material. With a special emphasis on the illuminating possibilities afforded by prepared piano writing in solo and chamber settings, Pelz' music is both experimental and grounded in unfolding narrative.

Backward inductions is scored for “augmented piano” (prepared and heavily amplified, with contact mics triggering auxiliary percussion instruments) and performed here by Meitar’s artistic director and pianist Amit Dolberg. The compositional organization of the piece works backwards from an original, multiple layered structure of repetitive gestures. Pelz makes small variations in phrase contours, removing a note in a sequence, repeating a grouping, reversing the direction of one of the component motives. In doing so, he not only creates propulsive dynamism in the subtly varied lines, he places the extended sounds of the prepared piano in slightly different spots in the rhythmic scaffolding. The work achieves a hypnotic balance between mechanistic impulses that are nevertheless animated with life and character.

Repetition with variation is a guiding principle in Pelz’ music, and Chinese Whispers zooms in on this developmental technique. Taking inspiration from the game associated with the title (otherwise known as “telephone” in the United States), we hear similar material morph and transform as it is heard in new iterations. Pelz organizes the piece into several sections, each of which focuses on components of the original “message,” from glitchy textural machines to disembodied sustained material. In this way, he puts his finger on a fascinating feature of communication, our individual capacity to focus on different portions of a whole, and to filter them through our own biases of understanding.

This approach to segmented sound can also be heard in Convergence for alto flute and electronics, performed here by Roy Amotz. Pelz explores granulations of sounds in contrast with their fully realized incarnations. The electronics function often as the middle-ground between fragmentary sounds and sustained ones, extending the former through a series of echoes and delays, and dissecting and manipulating the latter.

Like Chinese Whispers, marchons, marchons is scored for the full Meitar instrumentation of flute, clarinet, violin, cello, and prepared piano. For the first seven minutes of the work, it is decidedly more inward facing, eschewing the rhythmic propulsion of the first two tracks in favor of blooms of hazy harmonies connected by glissandi and ethereal harmonics. Written for the Expo Milano 2015, whose theme was “feeding the planet, energy for life,” Pelz reflected on phrases in the French and Israeli national anthems that position themselves at odds with that mission, lending the piece a critical stance. In the final four and half minutes of the piece, we hear darting, sardonic ensemble passages, perhaps a more direct challenge to live up to the Expo’s credo.

Three members of the Meitar Ensemble are joined by string quartet Quatour Ardeo for the final work in two movements, Blanc sur Blanc. Pelz chooses to amplify the string quartet and uses them as one might employ a “tape” part in an electro-acoustic piece – to create a sense of spatialization, timbral augmentation, comment on and frame a sonic environment for the other instruments. Again we hear a penchant for loops and repetition as a structural component in the “First Movement,” where Pelz’s loops accumulate in a manner he describes as a “logarithmic spiral,” accumulating material that becomes the enlarged loop before the process resumes. The “Epilogue” is a contrasting movement of sustained lines, quietly delicate yet charged with intensity and direction. It is a powerful way to end this collection of mostly very active music – a glimpse at an uneasy inner world lying behind the permutations and transformations of material.