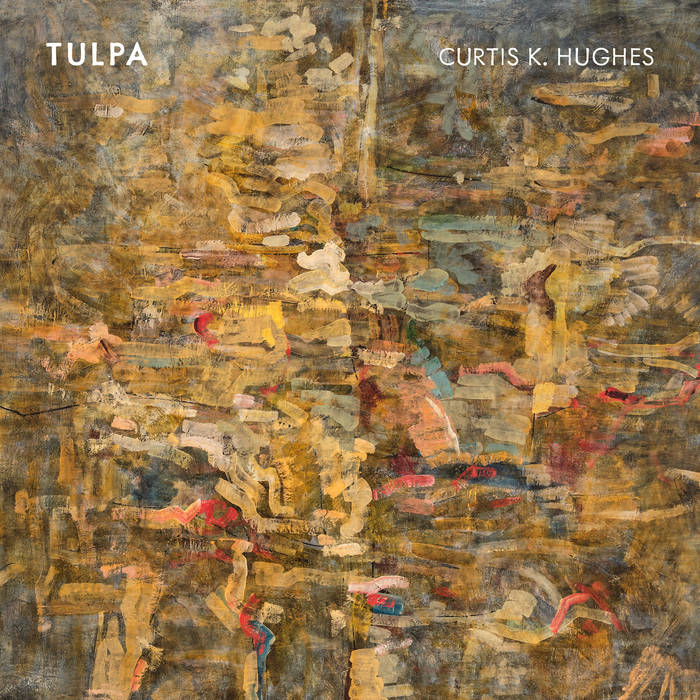 Tulpa is a fascinating retrospective of twenty-two years of Curtis K. Hughes’s creative work, ranging from a brief marimba solo to a major work for large ensemble. Elegant in form, restless, and expressively rich, these seven works performed by some of Boston’s most outstanding artists, reveal Hughes to be an imaginative and deeply talented composer.

Aaron Trant is the snare drum soloist in flagrant, bringing formidable technique to this idiosyncratic piece. Starting with insectoid language, the score develops by introducing new sounds and more resonance, creating the illusion of multiple voices. The effect is like a black-and-white photograph suffusing with color. The piece brings plenty of invention and surprise to fill its three minutes and 40 seconds.

antechamber is a tour de force, written for the Boston Percussion Group. The piece sets a slow pace, taking time to introduce new, abstract gestures, but then quickly transforms into a wicked clockwork of complex, insistent rhythms. Moving among the themes, sometimes Hughes makes a clean break, other times he lingers in an elasticated in-between space, letting the music breathe. The music is delightfully diverse, even letting it ride through fine, cool sections of fusion.

merger for two cellos describes the union of two entities struggling to find an exactly-right fit. The piece opens with a buzzing, electric fury of double-stops. Multiple strategies of engagement are explored — imitation, invitation, touch-and-go contrasts. The hocket of a simple melody is unexpectedly affecting, as is a recurring organum-like texture, delicate as moths’ wings.

In wingtones, clarinetist and pianist live through complications — sometimes antagonizing or destabilizing the other’s energetic flights, other times existing through simple melodies-on-a-walk. The second movement begins with long-limbed solos for each instrument, finally coming together, building energy through a dialogue. Earlier ideas emerge and gain traction toward an ending, but not a resolution.

it was not raining is the earliest work on the disc. Hughes deploys silence in between gestures, asking us to hear each on its own terms along with the larger whole. The piece was inspired by Beckett’s darkest fiction, particularly the bitingly bleak play The Unnameable. The music’s feel of suspension and unreality is well matched by Beckett, in which characters may or may not exist, or are figments of the narrator’s imagination. The weight of the piece balances on a slow, steady accelerando near its midpoint, which places the terseness of the surrounding music into higher relief.

Unreality is also one of the themes of tulpa. A tulpa is, plainly, a being created by pure thought. Hughes’s work is a response to David Lynch’s Twin Peaks, particularly the 18-hour film version. He doesn’t so much depict the film as interact with it, live within it and send letters back.

telophase begins with the introduction of a disjointed, staggering piano line, which, quickly proliferating, becomes a sensation rather than a theme. Beyond the breaking point the espressivo low end provides “get serious” exhortations and rocking, gently threatening textures. These repeating start-proliferate-break gestures provide the momentum for the music. It ends enigmatically, as if reality simply slipped away.

manufactured (for a purpose) starts in an atmosphere of gently swirling keyboard instruments, a sonic dreamworld. A spell wrought by clarinet and sinister strings ignites a hard groove from the bottom register, a vicious and uninvited guest. It spreads up and through the range, taking over everything it touches. Resistance is futile, but listen at 2:40 for a perfectly placed glissando.

“Un amour inconnu” is the centerpiece of the work, formally and expressively. This has to do with the chill bump-inducing soprano Rose Hegele, bringing a message from Proust. She sings from Swann’s Way, about a man’s obsession with a musical phrase that seems to be a living thing. More simply textured than the other movements, the work renders space for Hegele’s luminous, limber instrument. Pushing the ensemble’s dissonances with her own deft slides of microtonality, she convincingly owns the text and the time of this movement.

the number of completion begins with a lyrical bassoon, quickly threatened by aggressive, rough-hewn phrases from the ensemble. The vibe is suspenseful and roiling, and Hughes combines the ten musicians playfully, a nod to Lynch’s own numeric fascinations.

The music of Curtis K. Hughes is performed both nationally and internationally. He has been a professor of composition at the Boston Conservatory since 2008. This album features the Boston Percussion Group, Sentient Robots, and several of Boston’s finest new-music specialists, bringing an unforgettable vivacity and precision to the works.

it was not raining: Matt Sharrock, marimba

Back Cover: “Aphrodite and Artemis” (oil on linen - 2002) by Rosemarie Beck