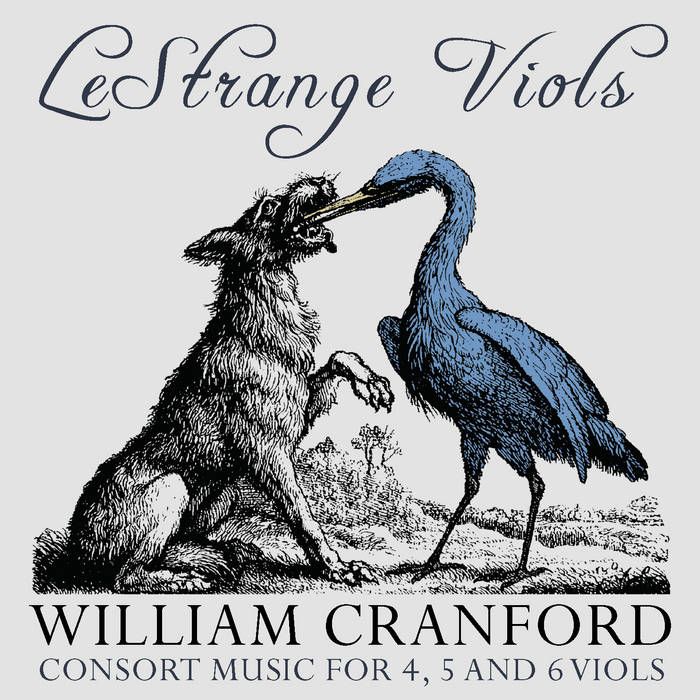 LeStrange Viols’ modern premier recording of the chamber music of William Cranford on the Olde Focus Recordings division is the first major single-composer release by an American viol consort in more than two decades. Little is known about the life of composer William Cranford (fl. 1630s) beyond his remarkable surviving chamber music for viol consort, a Renaissance string ensemble that attracted the best English composers from William Byrd to Henry Purcell. Cranford’s music—by turns sonorous, expressive, quirky, and forward looking—represents some of finest surviving writing for the ensemble.

Few specific facts about the life of William Cranford are currently known. The inclusion of his psalm tune “Ely” in Ravencroft’s psalter of 1621 and a possible reference to him in a list of royalist supporters (“delinquents”) from 1643 suggest that Cranford’s compositional career spanned the twenty-odd years coinciding with consort music’s final efflorescence under the Stuart kings James I and his son, Charles I. Though a handful of Cranford’s psalm tunes and catches made their way into print, the bulk of his surviving music was collected in several manuscripts associated with an enthusiastic and prolific community of musicians centered around St. Paul’s in London. It was among these composers and consort players, who included John Ward, Simon Ives, Thomas Ford, Thomas Brewer, Thomas Myriell, and others, that Cranford’s consort music was likely initially played and enjoyed.

Like English coterie poetry of the period, Stuart consort music served as a nexus of creative sociality and circulated almost exclusively in manuscript. For example, the Lestrange partbooks (GB BL Add. MSS 39550-4), one source of Cranford’s five- and six-part pieces, contain extensive contemporaneous annotations. These annotations reveal the careful side-by-side comparison of numerous manuscript copies that evidently circulated among Nicholas Lestrange and his circle of consort enthusiast friends. As one might expect of a composer deeply embedded in a community of connoisseurs, Cranford’s music is rich in quotation and allusion to the works of other composers of the idiom. Listeners familiar with the music of John Ward, Martin Peerson, William Lawes, and William Byrd, to name a few, will recognize various citations and playful adaptations. One prominent example is Cranford’s quotation of Lawes’ six-part sett in F major—the “sunrise” fantasia—in the opening point of his first six-part fantasia.

Perhaps because Cranford’s musical style is so idiomatic to a particularly insular vein of Stuart consort music, it has not yet found the popularity among modern listeners enjoyed by the brash and flamboyant William Lawes or the incredibly prolific and cultivated John Jenkins. Gordon Dodd’s characterization of Cranford’s music as “pointilliste” and “mechanical” has managed to cast a shadow, perhaps, across Cranford’s evident enjoyment of unique textures and droll sequences of close imitation. Cranford’s fantasias reveal an astonishing breadth of internal contrasts and subtle use of an often strikingly modern-sounding harmonic palette, such as his conspicuous use of modal mixture in the opening of the fourth fantasia a4. His consort music is also quite technically demanding, requiring frequent forays above the frets in the treble parts and the nimble execution of tricky divisions in the close quarters of dense ensemble textures.

Unlike Dodd, the seventeenth-century consort enthusiast Dudley North wrote of being quite “taken with what hath proceeded from Mr. Cranford.” We hope you hear in these pieces some of Cranford’s evident love for this esoteric but highly expressive idiom, a bit of the “gravity, majesty, honey-dew spirit, and variety” that North remembered of Cranford’s music.